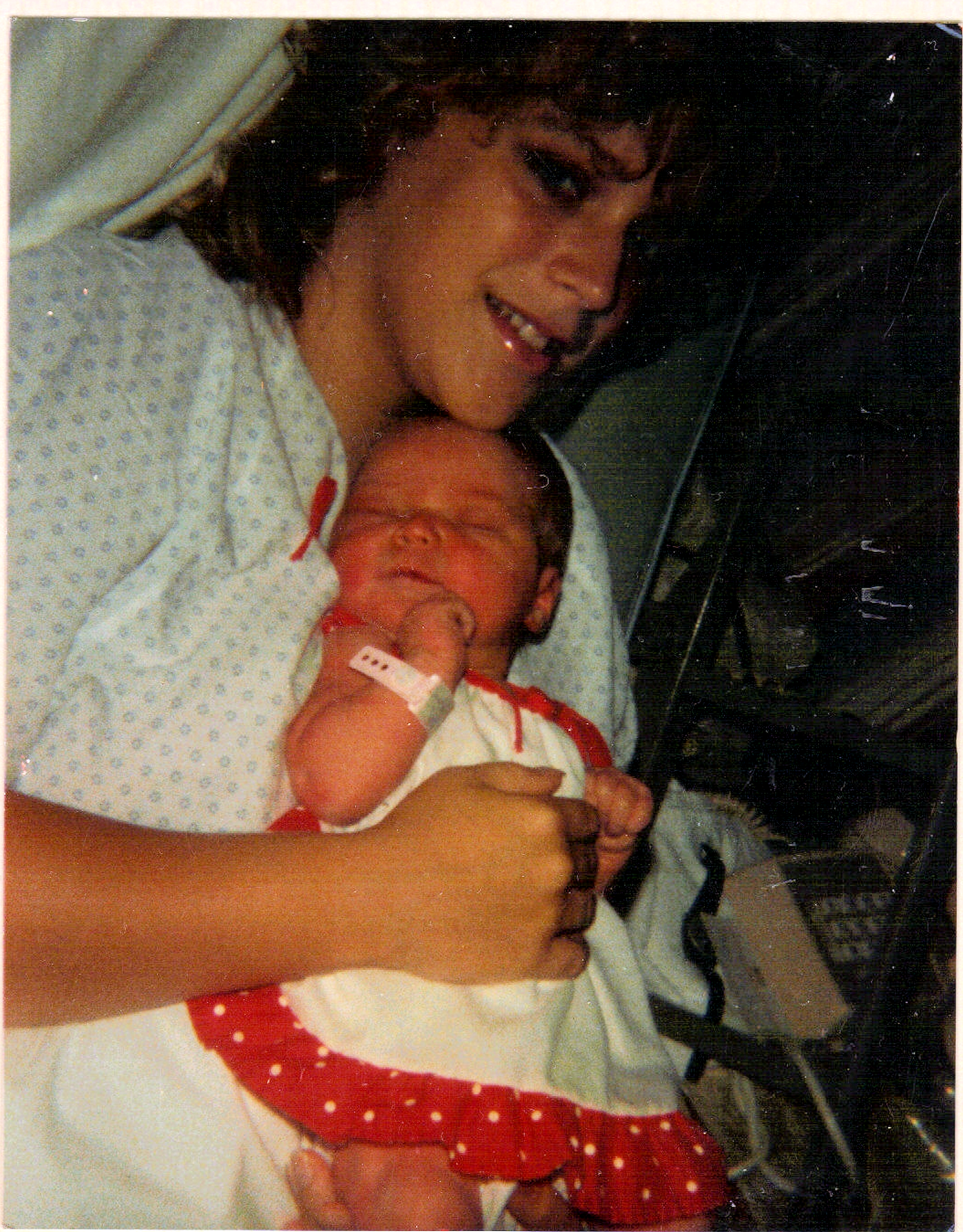 She wore my baby dress when Grandpa Burl dedicated her on our last day at the hospital.

There’s something I stopped telling people a couple of years ago, not because it’s a secret but because the words carry responsibility. I wasn’t ready to be responsible. One birthday passed, then another, then another.

When I was growing up, we regularly visited the most romantic couple in the universe. They loved each other, they embraced our family. They treated me like a person and not like a little kid. They played Scrabble with me and let me borrow grown-up books like The Hobbit. They would have made great parents, but they couldn’t have children. I was a high school surprise to my own parents, so I knew that pregnancy isn’t always planned. I was ten or twelve when I decided that if I ever became a teenage mom, I would let some wonderful would-be parents raise my baby. Of course, I told my previously teenage mom that I’d never be that stupid. Ah, the tactless innocence of childhood. Moms take so much crap.

I knew it the moment it happened. I was fifteen. I had planned to be a virgin when I got married, but at some point I chose the Cosmo girl for my role model and decided virginity was an embarrassment. After a wild year, I met a boy who actually  treated me like a lady, even if I didn’t act like one. He wanted forever with me and made me feel so grown up, it seemed possible. He put my name on the windshield of his truck. I made him French toast, because that’s what I knew how to cook. We saw each other nonstop for three months, and then my dad broke us up. Well, he tried to.

“Mike,” my grandpa said, “Do you think this is gonna work any better than it did when we broke you and her mama up?”

A couple of months later, before he crawled out my window one night, my boyfriend said, “I hope I didn’t get you pregnant.” I gave a convincing smile but knew it was too late. I cried for two months, until I decided I didn’t want my baby to be sad. I was sent across the country to live with my other grandparents, which turned out to be a blessing I’ll share some other time. A week after I finished 11th grade, I gave birth to this gigantic, precious little girl. In the hospital, they called her Valentine, because she was a gift of love to a family who had only one child and couldn’t have any more. They were ready to raise her and give her a life I could not.

It’s one of the hardest things I’ve ever done, giving up my little buddy after nine months of talking and singing to her. At seven months, I went to a Chuck Mangione concert, and my shirt fluttered with the force of her strong legs dancing. Apparently, we both like Latin rhythms. At eight months, she took over the show in our drama class—everyone stopped to watch her kick. The law gave me 90 days to change my mind and keep her, but I couldn’t do that to this couple who were so close to finally having a child. Many of those 90 mornings, I looked at myself in the bathroom mirror, deflated and alone, hoping I was doing the right thing.

I thought I’d have another baby some day, but I had bands instead. My oldest stepdaughter is four months older, and my stepson is eleven months younger than my Valentine. Every year since I met them, I’ve watched them grow and wondered about her.

She’s 28 now. Somehow, I lost seven years. I hoped she’d find me when she was eighteen, and then I was sure I’d find her when she was 21 and I was allowed to initiate a search. When she was 21, I hadn’t made anything of myself yet. I was ashamed of who I was. The year she turned 22, the first rocks fell in a landslide of loss for me. I spent three years watching people I love pass away.

When my heart healed a bit, I made a feeble attempt to search, but life got busy. I knew when I found her, I wanted to have time, to be there for her. I didn’t want to wave and run off. She’s 28 now. For the past year, I’ve had this image in my mind of her sitting on a curb, waiting for a ride after school. 5:00. 6:00. Night sets in. Where’s Mom?

Honestly, if she’s anything like me, she’s not sitting anywhere—she’s wrapped up in living every moment. But when you’re adopted and you have low times, sad times, you don’t realize everyone gets those. You think you’re different, the devil tells you you’re unwanted. It’s not true at all, Valentine.

I talked about it with my friend, Jennifer. She could not believe I’d kept this a secret. I didn’t think I had, but we met around the time I stopped telling people. Jennifer prayed for me. She didn’t say, “Lord, please light a fire under Kristi’s slow tushy,” but in her gentle prayer for God to do things in His time, I heard a heavenly Zippo go chhhk!

Three days later, the boy with the truck found me on Facebook. I called my mom, and she said, “Oh good! The ladies and I were praying for you to start the search!” I could almost hear God tapping his foot, so at midnight I emailed the adoption agency. They think they know where she is, so I’m hoping she responds when they reach out to her. I don’t have the right to expect anything, but I’m kind of excited.

Today, I am sharing this intimate story with friends and strangers. It’s a little awkward. I almost kept it to myself, but we learn about God and ourselves by watching others live. I’m determined to live visibly, in case I might help anyone else find hope, connection or forgiveness.

I’m also asking for a little inspiration. If you were adopted and got your first letter from your birth mother, what would you like it to say? What answers would you want? What questions would you want to answer?

Comment below if you’d like to give me tips for my first letter to Valentine.
Also, I don’t say it often enough, but there are children living with their own parents who don’t have food, shoes, education or hope. Please visit Compassion International and sponsor a child today. 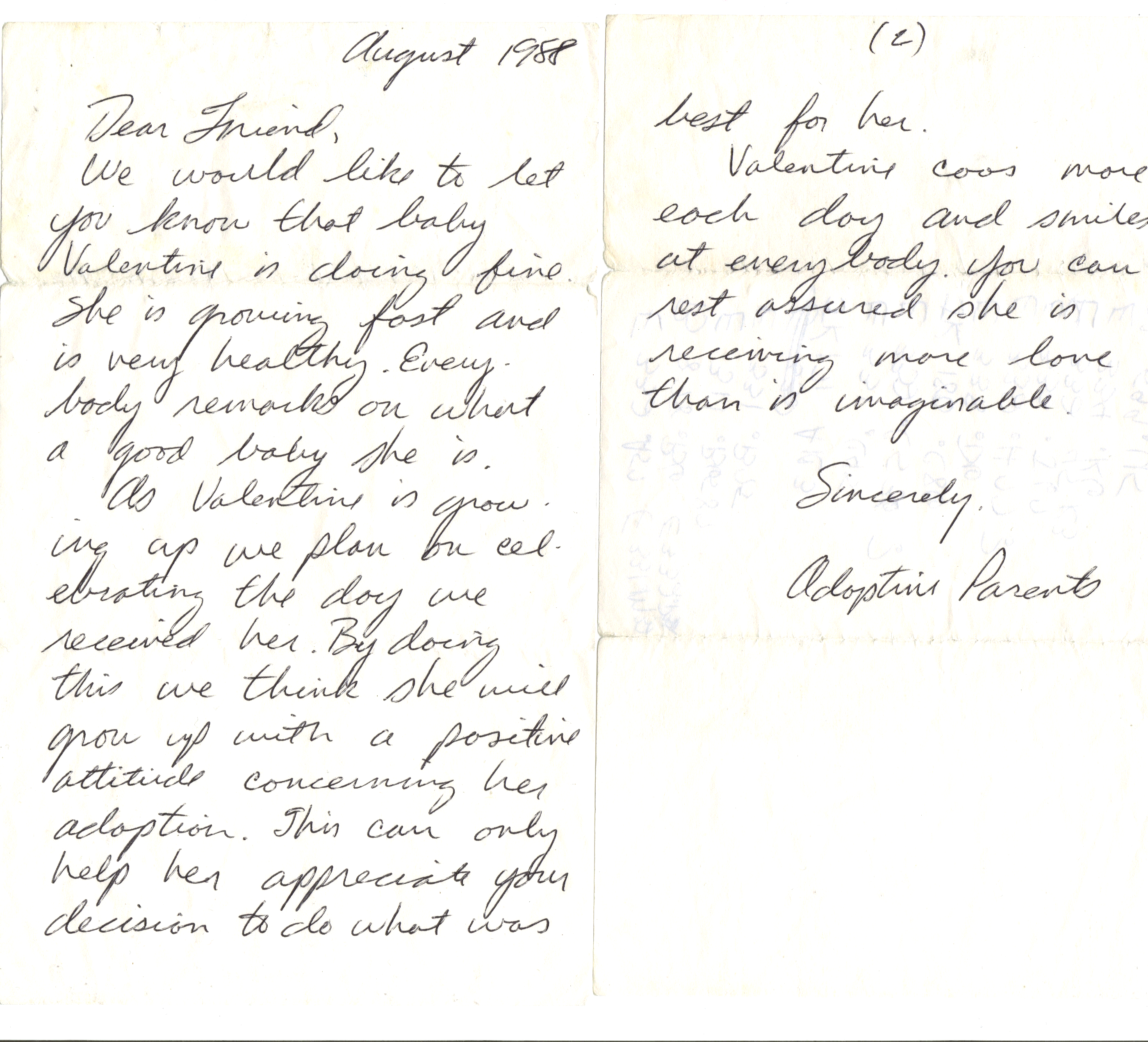