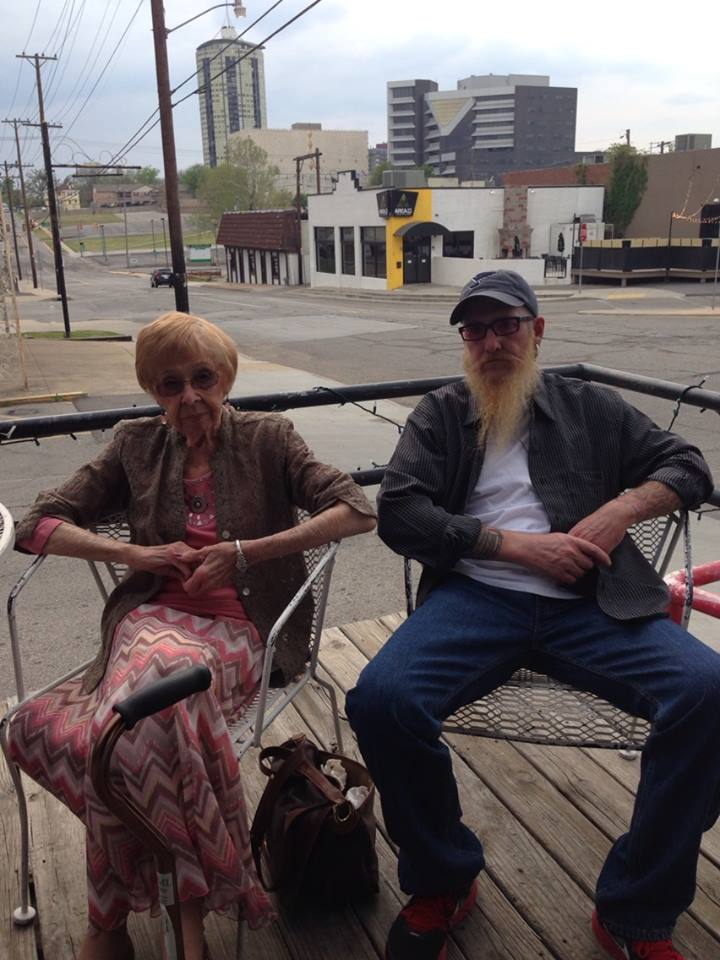 Grandma Staley and my brother-in-law Michael

When she was 75, Grandma found a baby on her doorstep. Okay, I was 25, but she took me in anyway. That’s the year Richard and I lost our spouses and took comfort in each other. We moved to Springfield, MO to help Richard’s stepdad in his auto shop, but the shop had closed two months after we arrived, and Ross had moved his family to Charlotte, NC. We weren’t living right, and Grandma didn’t approve, but we had nowhere else to go. Over the next few months, we sat at the breakfast table and got to know each other. We took turns cooking dinner. She used a whole onion in every dish, but she had a great collection of sauces and spices. We both liked things spicy.

Two days after my divorce was final, Richard and I took a day off work. I dressed in maroon silk, and before we left for the Arkansas courthouse, Grandma gave us wedding rings from Avon. As an Avon lady, she always had a stash of goodies. My ring was a Claddagh; Richard’s was plain silver. Why Arkansas? We could only afford one day off each, and Missouri required two courthouse visits at least three days apart. In any case, Grandma had accepted me.

Every time we visited, that kitchen table was our spot for talking. She listened as I poured out stories of my friends and family; I listened as she told me of her family history. I wish I’d taken more notes. She gave me a Bible on CD set, and we talked about God. She told me about the people she sat with–she was a companion for people who couldn’t take care of themselves, even when they were much younger than she was. I excitedly told her about the bands I was in, and more than once she came to Tulsa to see me perform. The last time, she was 92. In one weekend, I was in two shows and one acoustic songwriter night. I thought she’d get tired, but she didn’t want to miss a show. You’d have thought those hairy, foul-mouthed musicians were meeting the queen. They adored her and posed for pictures. She made sure I sent her copies with all their names, so she would remember them. People were her thing–she kept hundreds of pictures and shared them with everyone. For years, she handwrote birthdays and anniversaries on calendars and gave them to her son–Richard’s dad–and Richard’s mom as well. Every grandchild received a calendar, too. When she could no longer write very well, I forgot every birthday that wasn’t on Facebook®.

She would have been 95 today. We’ll be saying goodbye to her body Wednesday, but on 6/28/2017, she set it aside and began enjoying her new one. Enjoy heaven, Grandma. Thank you for bringing it to earth for your kids. We love you.