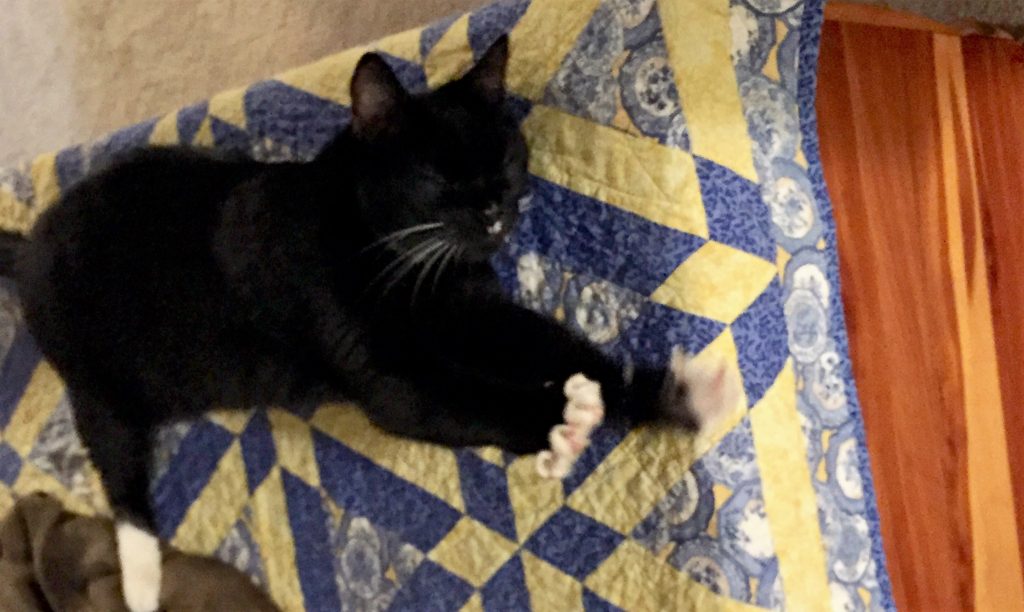 I’m going to do it. Only for a moment. Stick with me; you’ll see why. I’m going to be that writer who talks about her cat. El Gato.  Gatito Mosquito is his whole name. He has three legs, a tuxedo, and he’s the toughest of our three cats. He’s also the one who truly cares about us the most, not just whether we’re available for a massage or ready to dole out treats. Because he’s tough, I assumed he was just like me, able to adapt to any situation. I’ve heard people talk about cats being traumatized by moving, but not my cats. They’re the best cats ever, sensible and okay with anything as long as we’re together.

Because he’s tough, I forgot Gato is the most sensitive of our cats, and he’s lived his whole life around two people, with rare exceptions. I forgot, until this morning, when he didn’t stand outside the shower, telling me about his night and asking me my plans. He didn’t bug me when I made breakfast. Most mornings, he drives me nutty. His absence made me worry. I went outside calling his name, and he met me at my neighbor’s fence. He told me at length how he felt but refused to come out.

We do that in relationships. We connect with someone so deeply we imagine we’re identical. When we meet, we’re curious about our differences, we ask questions. We do a little dance, looking for ways we’re in step with one another. We seek out familiar personality traits. Those similarities help us step safely, like Indiana Jones tossing stones to find the invisible steps over a deadly chasm. Forgetting our differences, we step into danger.

What if the invisible steps shifted in response to undiscovered variables?

After Professor Jones crossed the chasm a few times, lugging buckets of treasure of course, he might do what I did. He might assume things were safe because he’d walked the path. I assumed Gato was okay, because we’ve had 2 moving nights and 2 unpacking parties in the past week. He’s stayed out from under the throngs of strangers, so I figured he was sturdy and stable. I was bustling by with boxes, unpacking and inattentive. I drove him to use the cat door. It didn’t matter that everything was strange and smelled like the previous cats and dog who lived here.  I told him to get over it.

Worse, when he came to me at the neighbor’s fence, I tried to guide him toward the opening. He flinched and my wave became a swat. I didn’t mean to swat him. He jerked in fright and our motions simply conflicted. A swat is a swat to a twitchy cat. From that point forward, he stayed far away.

I wish I could say, “Cats are just skittish,” but I’ve been through this with people, too. Unwilling to “pussyfoot around”–I understand that saying better now–I’ve plowed by them with enthusiastic vigor. Our similarities and closeness made me think they were as excited as I was. Their silence made me think they were okay, or that they would get over any hesitation. When anxiety hit, they behaved in ways that took me by surprise and my attempts to bring them to me were as harsh and misunderstood as that swat.

What if we didn’t stop asking questions when we became comfortable with someone? I can understand you better if I know more about you. What if, when people felt pressured, anxious or nervous, they could say something and trust us to pay attention? You’re more willing to talk if I don’t seem likely to brush you off.

Tuna didn’t do the trick. I sat outside the fence, calling and meowing and blowing on the tuna to make the scent waft toward him. Gato came from under the deck and meowed back but wouldn’t come near me. I called, cajoled, softly commanded. I tried to sound normal and muffle my worry and frustration. Finally, I ended up crying because I really was worried about him. “We’re family,” I sobbed. It was then he finally came to me. It’s nice to know he cares more about me than tuna, but I was miffed that he pushed me all the way to tears.

Why do we resist vulnerability? When I’m pushing you to do what I want, you instinctively resist. Why do we refuse to reconcile until both parties are emotionally raw? What if we checked in with one another before drama began, truly showing our concern and making adjustments when needed?

Building a secure relationship takes practice, and it takes both parties. I love the way my friends Jennifer and Tim ask each other, “How’s your spirit today?” You can use your own phrasing, but they are vigilant about self-awareness and communication. It’s so logical you find yourself asking, “Why don’t I do that?” It’s awkward at first–people have this juvenile idea we should just “get” each other, or just get over our feelings of stress. Without self-awareness and communication, neither person sees we’re nearing an emotional edge until someone’s hiding beneath the neighbor’s deck. But these two ingredients are as important to long-term relationships as chlorine is to my neighbor’s pool. We must pay attention or we can’t enjoy either one.

As I write this, Gato sits beside me, pawing at phantoms in his sleep. No visitors this week, no outdoor time. Rest here, Mr. Mosquito and may you always feel at home wherever we are.